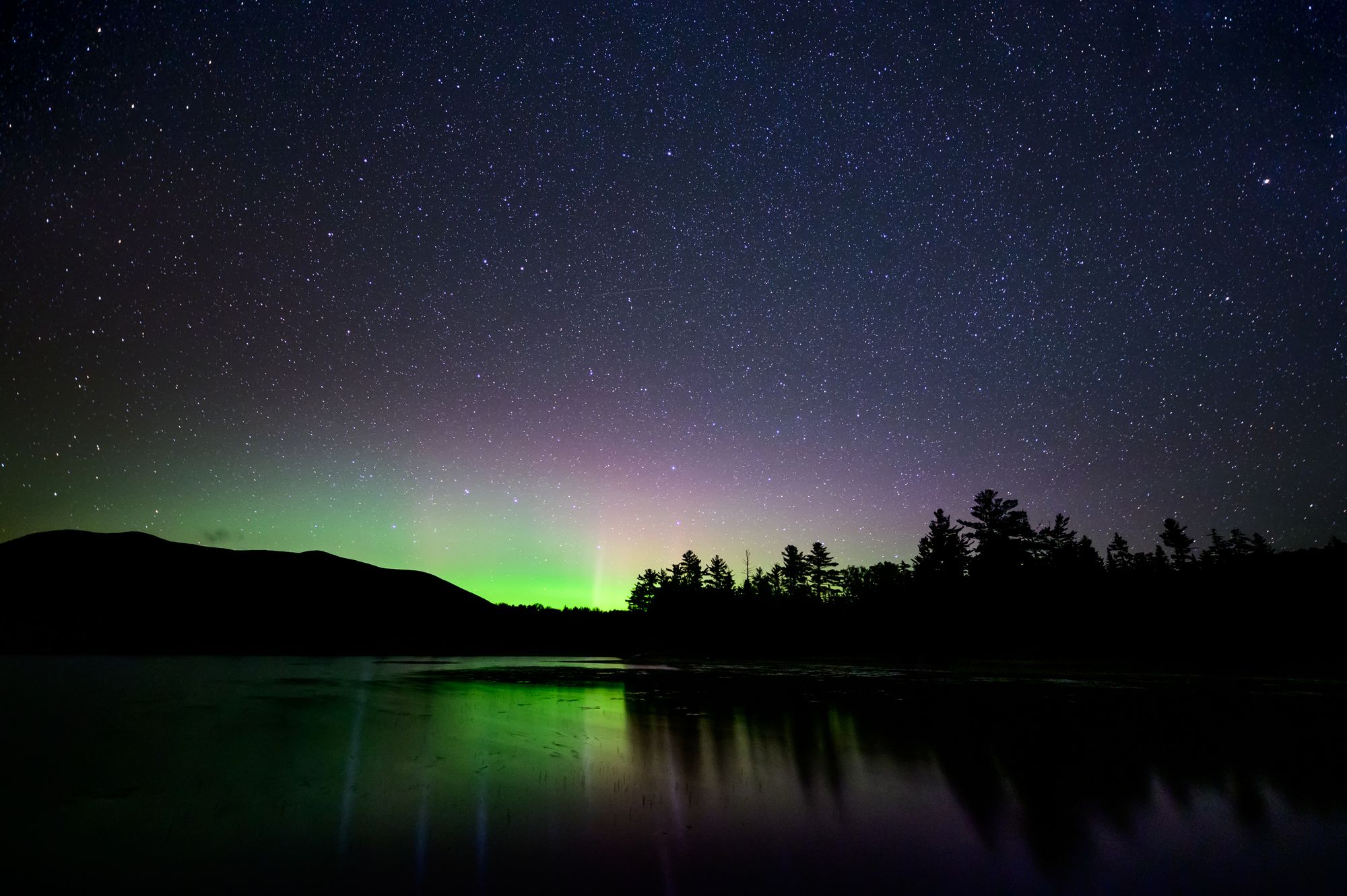 In even moderate geomagnetic storms, the Northern Lights can push down into mid-latitudes as far south as central Maine. Storms like this can happen a few times a month even during solar minimum, but despite the regular occurrence of geomagnetic storming, several factors work against the average New Englander hoping to get a look at this breathtaking phenomenon. However, a good understanding of the forces at work and the place we live can help our chances substantially, making Aurora Chasing in New England not only a possibility, but perhaps the most rewarding night sky adventure anywhere in the world.

The most obvious factor making aurora chasing hard is that we live in an area not known for its clear and consistent weather; what makes New England an exciting place to live with the change of each season also makes it an extremely challenging environment for astronomers and aurora chasers alike. Clouds tend to obscure our skies most nights, harsh winters make observing difficult, and the sheer undeveloped vastness of Maine's dark sky regions make the average observing trip into an exercise in survival. 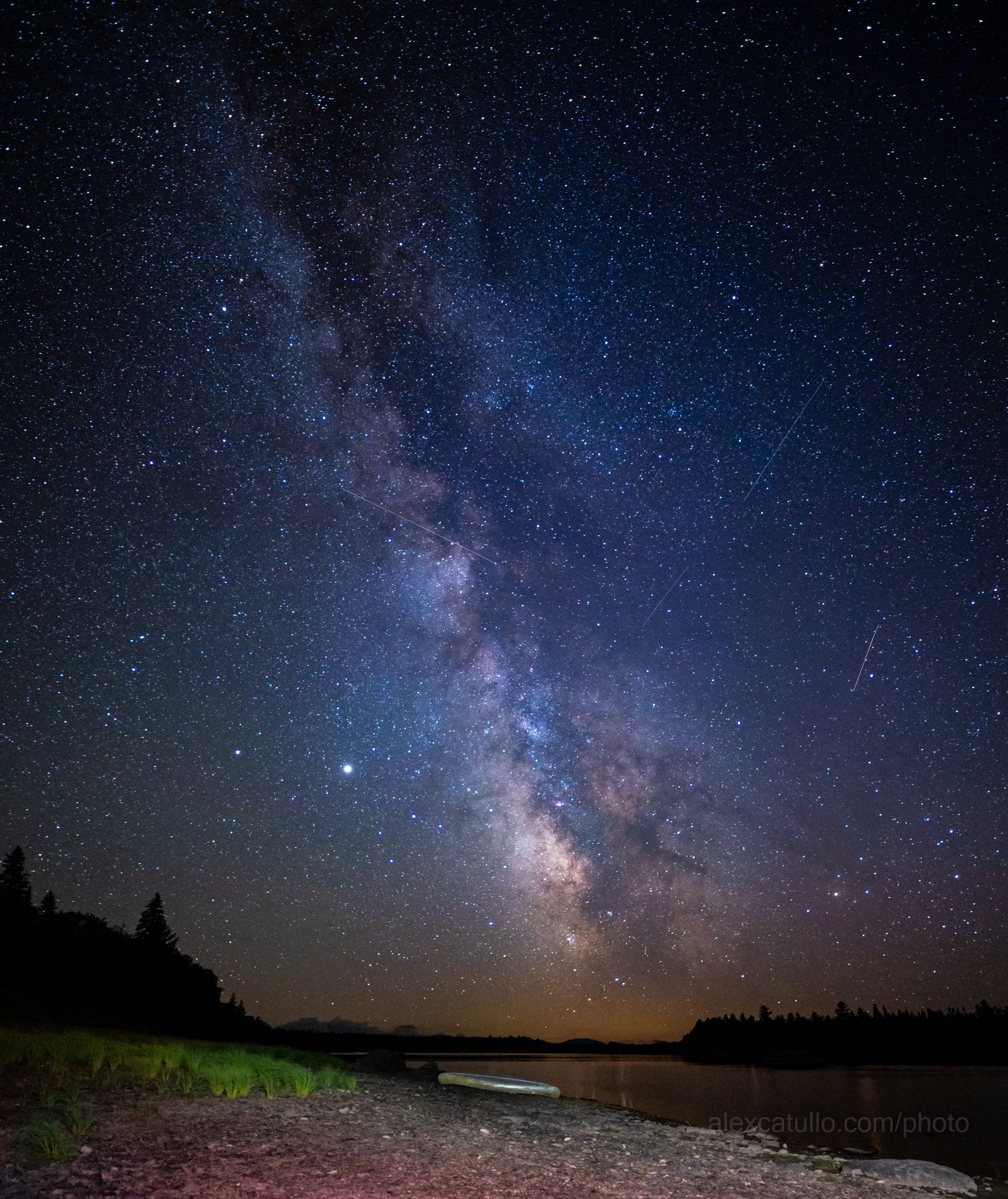 Sometimes a canoeing to dark skies is easier than driving.

Even if the weather cooperates, the one thing that will never change about the place we call home is that we are half a hemisphere away from the polar reaches which experience auroras regularly. The Auroral Oval where the lights tend to appear hovers around 65 degrees of North latitude, about where Fairbanks, Alaska and Reykjavik, Iceland lie. For auroras to make it down into our latitudes, a stronger geomagnetic storm will need to push that oval south, which happens more than a few times a year, making aurora chasing a very real possibility here even if we lack the Arctic advantage of Norway and Iceland.

Thus, if the lights appear on a regular basis here in New England, what stops us from enjoying them from our own homes? To answer this we must confront the fact that even as far up as Portland, we live in the most populated megalopolis in the country, a region of urbanization with the highest economic output in the world. With all this prosperity comes light pollution, which has a major impact on our ability to see auroras which are just on the edge of visibility. Only the deep interior of northern Vermont and New Hampshire provide both road access and the dark skies necessary to keep the northern lights from drowning in light pollution, but on most days when the aurora is active, it's the punishing vastness of the North Maine Woods that provides the necessary darkness for the lights to appear.

In light of this evidence it seems a fools errand to chase the Northern Lights in an area so poorly suited for this type of adventure, but while the odds are stacked against the Northeast Lights chaser, an abundance of data and community guidance exists that can greatly increase your chances. First, it turns out that cloud cover and weather conditions are areas of focus for a large part of the public, so much so that the National Weather Service maps cloud cover predictions across the entire country and publishes the data for free. Find the clear sky, and you've opened the first window to the aurora.

Dealing with our lowly latitude isn't quite so easy, but we have a distinct advantage over other parts of the country in that the earth's magnetic field lines inexplicably dip over northern Maine, making it easier for auroras to push south into our region.

While geographic latitude helps, magnetic latitude is king when it comes to finding the Northern Lights, and our part of the world shares a magnetic latitude comparable to Oslo, Norway, which regularly sees auroras. Based on the map of the earth's field lines, we can determine that a storm of kp5 strength or above has the potential to produce auroras within New England. A kp value is a rough indicator of geomagnetic storm strength, and it is forecasted by the US's own Space Weather Prediction Center. By looking at predicted kp values, we can find out if an aurora can appear in the clear sky window we've identified.

Finally, the last obstacle to overcome is the bright lights of New England's cities and towns. For most New Englanders, avoiding light pollution means going for a drive, potentially a very long drive if you want to reach Northern Maine's zones of pure darkness, known as class one zones. Like the weather, light pollution is also a topic of intense study and has the maps and data to go along with it. Light pollution is rated on a scale known as the Bortle Scale, where Bortle Class One represents the purest, darkest skies. Finding the lowest class within your clear sky window is essential to increasing your chances of detecting an aurora either with your eyes or with the sensor of your camera. A dark sky map will help you determine where these areas lie, and when cross referenced with a good atlas and your cloud cover maps, you'll have set yourself up nicely for a show.

Armed with the best possible research and planning, a Northeast Lights chaser is still only part of the way there. Predicting the strength and arrival time of auroras is still poorly understood, and additional factors such as poor road conditions, bright moonlight, and complex solar physics can mean a long night under bleak skies. An aurora chaser must always be prepared to take a "zero" on a chase, but living in New England means that just going out and trying will always show you special places that are remote, beautiful, rugged, and haunting. I have never regretted going out on a chase, and when everything lines up just right, nothing can replace the experience of catching this elusive apparition in my own back yard.

The darkest of night skies